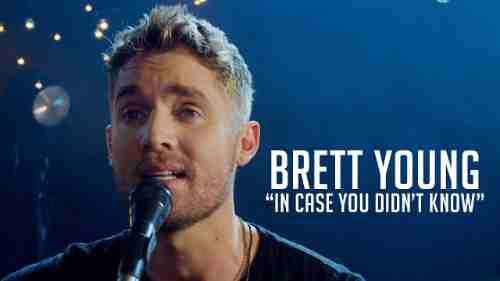 Brett Young achieved a No. The No. 1 hit for his debut single “Sleep Without You” was followed by his second single, “In case you didn’t know.” Young, who co-wrote 11 of the 12 songs on his Brett Young Album, wrote “In Case You Didn’t Know” together with some of their songwriting buddies. Young, who wrote the song, recounts his experience in his own words.

“In Case You didn’t know” was written in Mexico at a songwriter retreat. Trent Tomlinson with Tyler Reeve. Trent started to tell me a story from his childhood. He said that his mom would stop him when he was little every time he went outside the house. And she would say, “Trent, in case you didn’t already know, I love You.”

YouTube released the official music video to In Case you Didn’t Know at the beginning of January 2017. Below, listen to Brett Young’s song.

IN CASE YOU DIDN’T KNOW THE LYRICS

Brett Young was a co-writer of this song with Nashville songwriters Trent Tomlinson (and Tyler Reeve). They wrote it during a Puerto Vallarta Writer’s Retreat.

Young recorded a behind-the-scene video in which he said that Trent started to tell us a story about a thing his mom used to do growing up. “He stated that every time he would leave the house, his mom would stop him as he went out and say, “Hey Trent, I love you.” Tyler and I looked at each other and were amazed that we had not written the song.

The simple performance was filmed at Chattanooga’s historic Tivoli Theatre. Young told ABC Radio he made sure the promo imagery was not too confusing.

He stated, “We don’t wish to tell so much of the story that anyone that wants to make their story feel alienated.” The same goes for the video. We selected a beautiful Chattanooga theater, and it’s just me and my guitar.

Young smiled and stated that “there is a girl in it for a moment, but it’s more about how the idea or the girl.”